When Jeep tried to crash the Ford Bronco's debut celebration with the V8-powered Wrangler 392 Concept, the world knew it was just a matter of time before it went into production. That time is now, as the cover is officially lifted on the first factory-V8-powered Wrangler in upwards of 40 years. The Jeep Wrangler Rubicon 392 is here, and it's ready to tear up asphalt as well as sand, dirt, rocks, trails, and possibly the egos of Ford Bronco owners.

Jeep touted that it had been driving around Wranglers with V-8s under the hood in secrecy for some time and that we'd missed them. We knew it wasn't a secret. We'd like to think we know Fiat Chrysler, Jeep's parent company, pretty well by now, and the automaker loves to stuff powerful V-8s (most notably the 700-plus-hp Hellcat supercharged V-8) into practically everything in its lineup. The latest to get eight-cylinder injection is the popular Wrangler, originally seen in concept form, which is getting a 470-hp 6.4-liter V-8 under the hood. And it's a Rubicon on 33-inch tires.

The Rubicon 392 is equipped with leather seats with bronze stitching to match the exterior's bronze accents, and it comes standard with an 8.4-inch touchscreen with Jeep's Off-Road Pages, which display information including pitch and roll, GPS coordinates, and power distribution. And, like the other Wranglers in Jeep's lineup, a host of accessories, such as LED lights, rock rails, and winches, will be available from Mopar so customers can further customize their SUVs.

Official pricing and fuel economy figures won't be released until closer to launch, which is scheduled for the first quarter of 2021, but we do know that a Rubicon Unlimited equipped to the same level as the Rubicon 392 would cost $60,255. The 392 packs leather upholstery, the 8.4-inch premium audio group, the body-color hard top and fender flares, steel bumpers, remote proximity entry, two safety packages, and the LED lighting and cold-weather group options as standard equipment. To get to an estimated MSRP for the Wrangler Rubicon 392, we could add the roughly $11,000 delta between Dodge's Durango SRT 392 and a similarly equipped 3.6-liter Durango 4 GT or the $4,000 between a 6.4-liter Challenger R/T Scat Pack over an otherwise similar GT 3.6. (The $13,450 difference between a Grand Cherokee Summit 3.6 and an SRT 392 covers a lot of items the Wrangler doesn't get, like adaptive suspension.) So let's peg the price somewhere in the middle of the Dodge pricing and call it $67,000. 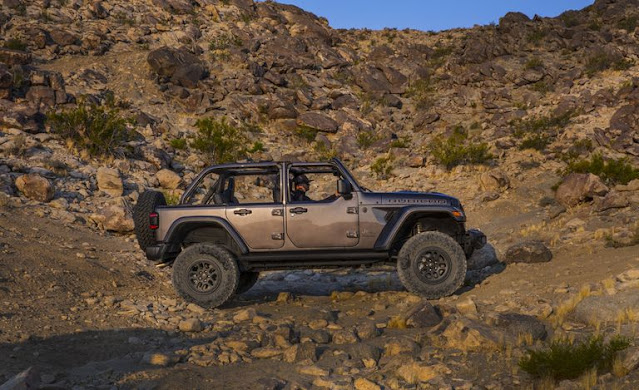 Jeep doesn't specifically say the Rubicon 392 is only available in four-door trim, but stats for the off-roader reflect four-door capacities. Jeep also doesn't mention a price, but it's a safe bet this will be the most expensive Wrangler in the lineup. Right now, that honor goes to the Wrangler High Altitude at just under $50,000 so $60,000 isn't out of the question.

We expect to see pricing information closer to the 392's on-sale date, which comes some time in the first quarter of next year